Gettin' Jiggy With It -

Gettin' Jiggy with it...

You probably know that the person responsible for those song lyrics is none other than the legendary Will Smith. Sorry if I got the song stuck in your head – lol.

But did you know that Mr. Smith also has a really good video about how failure is a key ingredient for success that went viral a while back?

The video (I thinks it’s from his Instagram) does a good job of acting as the “icing on the cake” to the information I’ll be sharing with you in this article.

So tell you what…

I’ll share the video with you in just a second, but first, let’s have a little talk about what many people incorrectly think is the opposite of failure… Now to be honest, I’m not too crazy about these definitions.

These definitions tell us that success has to do with achievement of a desired result. But I can tell you plenty of times that I’ve “succeeded” even though I failed to achieve my desired result.

I’ve found peace and happiness in NOT getting what I wanted more times than I can count. And isn’t whether or not you’re happy and at peace a better definition of success?

Also, like you, I’ve experienced times when I’ve achieved my desired results only to realize that it wasn’t all it was cracked up to be.

So, while Google and I have different definitions of success, let’s, for the purposes of this article, just go ahead and use the definitions that Google has provided.

Besides, if you ask the average person off the street, they’re likely to define success pretty close to what the dictionary/Google says it is… so we’ll just roll with that.

OK, so now that we’ve defined success as pretty much achieving a desired result (even though it’s not our favorite definition), the next question is…

How Do We Achieve Success?

What ingredients do we need if we’re going to bake a “success cake”?

Yup, you read that correctly.

Truth be told, failure is one of the key ingredients, if not the most important ingredient for success.

Failure is to success, what flour is to cake.

Well, in order to understand WHY failure is so critical to the success process, we must first understand what failure brings to the table.

5 Reasons Why Failure is the Key to Success

Before I jump into the reasons, did you notice the other ingredients I mentioned above that lead to success?

As you'll soon see in the following reasons, these are all byproducts of failure. That is why failure is the most important ingredient of success!

AH-HA moments are a great gift.

Have you ever been going through something challenging, when all of a sudden, that giant light bulb that lives above your head suddenly goes off and you gain a perspective that you had never been able to see before?

Suddenly, something clicks and you are finally able to take your new realization and move forward with a new plan toward reaching your goal. Without the experience of failure, you would’ve never told your brain to start working on an alternate solution to your problem.

Without the experience of failure, the light-bulb would never have had the opportunity to blind you with clarity as it did.

#2: Failure Keeps the Ego in Check

There is something to be said for staying humble. A lot, actually.

While the ego may have a role to play in the success formula, there is a thin line between a healthy ego (confidence) and an unhealthy ego (cocky). Rest assured that if you cross that line, failure will put that ego right back in its place.

We know that people can easily get cocky. Too many wins in a row and you start to think your shit doesn’t stink (trust me, it does). And without humility in your life, you lose important parts of your humanity (like the ability to be empathetic).

Too much ego isn’t sexy.

But you know what is sexy? Someone who is good… knows they’re good… but can still serve others with humility.

So if your ego starts to get a little too big for its britches, failure will be there to put it in check. And that’s a GOOD thing.

I’ve said it before; failure is a great tool for growth.... as long as you’re looking at it the right way.

Not only can failure boost your motivation and make you more determined, but it can also plant the seeds for new (and different) possibilities.

Failure can act as a road to despair, or as a springboard to growth… the point is to pay attention to your reaction, because what grows out of the initial failure is entirely up to you.

Use failure as an opportunity to grow. Adapt your plan to account for what you’ve learned. If not for the failure, there’d be no prompt to make such changes.

Think of if this way…

If, for example, you want your body to change… you MUST push it to the point of failure as often as possible.

That’s all working out is. Pushing your body to the point of failure so that it’s forced to make a change.

Push your body to the point of failure with enough consistency and frequency, and before you know it, you’re on the cover of one of those fitness magazines.

So, if you want extraordinary change (i.e. success), you might want to consider failing as much as possible, as quickly as possible.

#4: Failure Actually Puts You on the Path for GREATER Success

Follow me on this one for a second and give it some thought.

You know good and well that they didn't start out on top.

For the most part, they struggled and paid their dues to get where they are today.

But here’s the thing most people miss (pay close attention)... It was FAILURE  that actually FORCED them to make a change;  thereby putting them on a path to even greater success and achievement!

Vera Wang, the famous fashion designer was once a figure skater. When she failed to make the U.S. Olympic figure skating team, she entered the fashion industry.

Milton Hershey, the guy responsible for the Hershey chocolate bar you ate last week, was fired from his apprenticeship with a printer. Then, he tried to start three different candy companies, all of which failed.

Amazon.com founder, and one of the richest men in the world, Jeff Bezos, was “Captain Failure”.  One of the most notable disappointments was an online auction site, which evolved into zShops, a brand that ultimately failed. Still, CEO Jeff Bezos would re-purpose the idea into what would eventually become the Amazon Marketplace.

Do you see my point. It was FAILURE that forced Vera Wang, Milton Hershey, and Jeff Bezos onto different paths. Paths that would not only lead them to greater success, but also change the world!

Like the world’s greatest success stories, you have to realize that you’re not going to just soar into the winner’s circle right out of the gate either. No one is. The PROCESS is what teaches you. The failures are what will give you the feedback you need to discover the right path.

I.Q. stands for Intelligence Quotient and it measures your reasoning and problem-solving abilities.

But your A.Q is something different.

“A.Q.” stands for Adversity Quotient, and it measures the ability of a person to deal with adversities in his or her life.

Tough skin is a necessity on the journey to success.

Like Thomas Edison said when he was trying to figure out the light bulb:

So What Does This All Mean?

Well, it basically means that if you want to start succeeding, you better get busy failing.

As one of my millionaire friends likes to say:

“If I want to succeed at something, I just start failing forward as fast as possible!”

Failure is inevitable. And it’s also a gift.

Success is a PROCESS. And failure is a very necessary part of that process.

Just like your cake won’t bake without flour… success won’t happen without failure.

Failure isn’t to be feared - it’s to be learned from.

Remember… failing is the key to success. Failing does not mean that YOU are a failure. It just means that you figured out one way that won’t work. And that means you’re one step closer to success.

Here is the Video I promised you.
Will Smith explaining how failure is a key ingredient to success...

Failure Quotes by Successful People on How to Overcome

To keep riding the inspiration train that Will just put us on, I'm going to leave you with the best failure quotes from people who have made the same mistakes as you.

We can learn a great deal from these men and women who have experienced first-hand that failure is a key to success. We can learn to respond to disappointment with perseverance and refuse to let a feeling get in the way of a dream.

You can apply these lessons to your own business and life, turning failures and mistakes into success.

Mix Failure Into Your Own Business and Life

So, don't be afraid to fail. Push yourself outside of your comfort zone and don't worry about whether you will fail or succeed.

If you work hard and learn from your mistakes, your efforts will eventually overcome your obstacles. For more on that concept, check out my article, "When Will I Succeed?"

If you want to fail forward as fast as you can, you should join my Facebook group. It's filled with people who are learning to embrace failure as a stepping stone to success. We encourage each other, offer advice, and celebrate our wins together.

We learn how to gain confidence when speaking in public and share our message with the world. I'd love for you to be a part of it.

Read Next:  Just Throw Some Sexy On It (this concept changes everything!)

Journey vs. Destination: Why Life is a Journey, Not a Destination
October 13, 2021 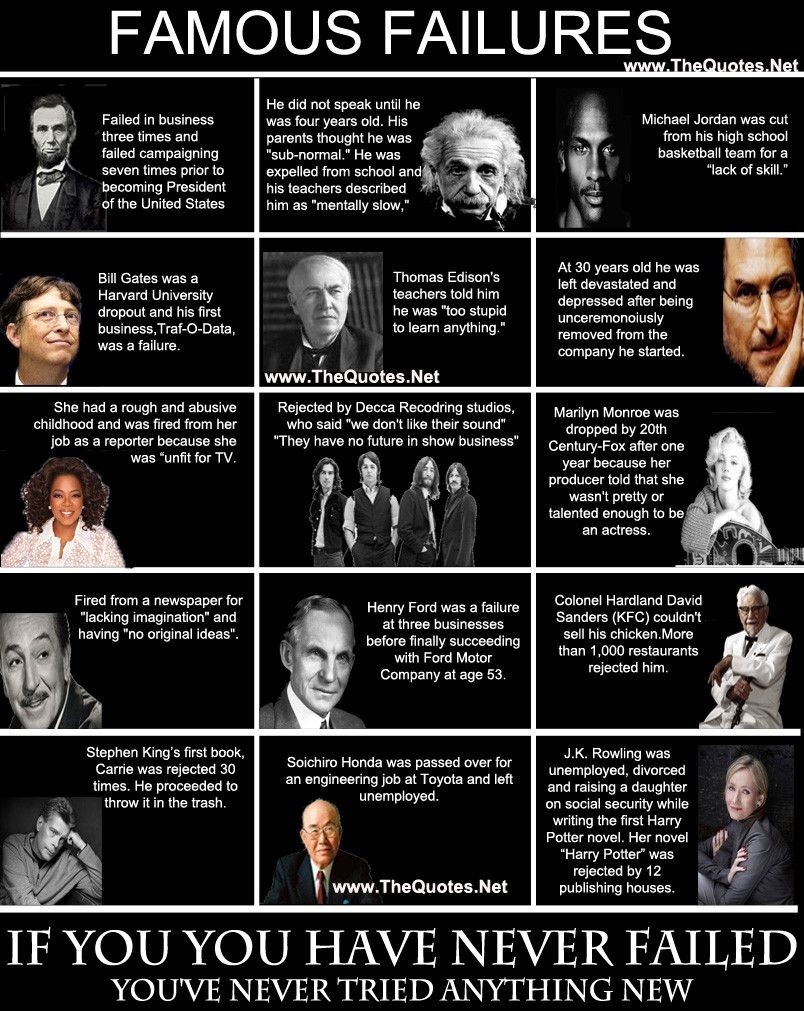